There have only been three basic styles of factory accessory luggage racks for 356 Porsches, not counting the variations of some for single grill vs. dual grill models. The first two were made by Reutter, and the third by Leitz. Some were painted silver, some were painted the color of the car, and some were chrome plated. There were, of course, many aftermarket luggage racks available for 356 Porsches, perhaps the best known being the Amco Travel Rack. And there were all the home made luggage racks as they are not that difficult to build. This website will track the timing of these various factory accessory luggage racks and the differences between them.

Were Luggage Racks an accessory for 356 Pre-A Porsches? It appears that they were, at least based on the brochure shown below. And a familiar name was the manufacturer, Reutter. You know the name Reutter, they built 356 bodies for Porsche beginning in the early 1950's. In fact, when Porsche moved to Stuttgart-Zuffenhausen in 1950 they occupied building space rented from Reutter. That relationship grew over the years until 1963 when Porsche acquired Reutter.

Little information is available about when Porsche first started offering luggage racks as factory accessories, or when they first began modifying the rear deck lids for mounting luggage racks without drilling new holes. Unfortunately, the above brochure is not dated, so we can't tell for sure when these luggage racks first appeared. However, it is clear that they were available for 356 Pre-A's and that they were manufactured by Reutter. Of course, there were many numerous other luggage rack manufacturers in addition to the homemade units. This style of luggage rack is mounted on the rear deck lid, which can be opened without problems even when the luggage rack is mounted.

A Revised Luggage Rack by Reutter in 1956!


The article above first appeared in Christophorus Magazine English #1, in 1956. It announced a new and improved luggage rack for Porsche, which represented significant improvements over the previous model (shown above). This new version came just in time for the new 356-A's which were also introduced in 1956. Instead of metal accessories holding skis in the earlier luggage rack, leather straps were used to hold the skis in the improved version. Also, the high bar at the bottom of the travel rack was curved to accomodate a spare wheel and tire. This new version could be ordered painted silver grey or the color of your car.

What the Factory Accessory Catalogs Showed.

Aftermarket Luggage Racks for 356 Porsches from the 1960's! 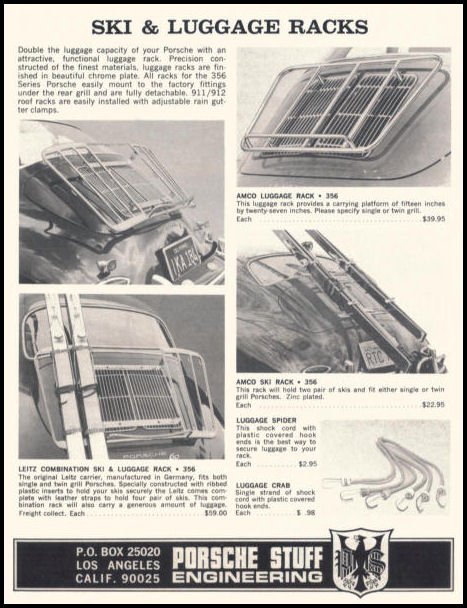 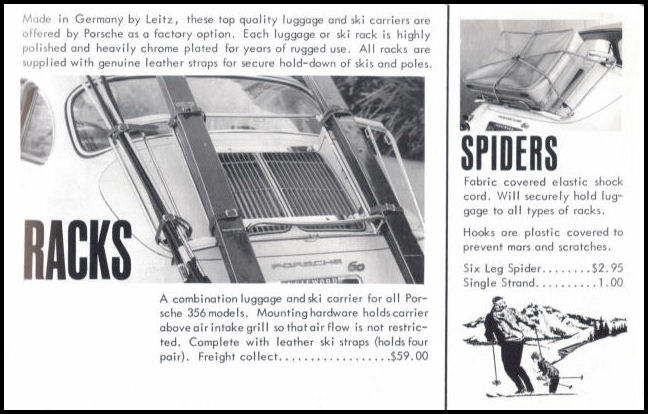